The third and final version 1968 - present has 2 Humbuckers

Built from 1990 to the present

This model became available in 1983

This is of course a marketing ploy as Jimmy Page has 3 Main Sunburst Les Paul's.

No:2 is a 59 Sunburst a gift from Joe Walsh. It has Phase and Series/Parallel switching hidden just beneath the pick guard.

No:3 is a 92 Sunburst made by Roger Giffin at Gibson's West Coast Custom Shop.

Gary Moore plays a 1959 Sunburst which was given to him by the legendary Peter Green, from Fleetwood Mac.

Jeff Beck played a Brown Les Paul Classic for his recording of Blow by Blow, released in 75 and produced by George Martin.

George Harrison had a 68 Red Les Paul (given to him by Eric Clapton) which started life as a gold top, due to the visible offset join.

Well I have succumbed, and have added to my collection.

I have bought a Fender Stratocaster, Signature. "Eric Clapton's Blackie"!

This differs greatly from the Les Paul, immediate difference is weight.

I feel I can take the Fender away with me on my travels, I have a Pandora's Box, which allows me to practise anytime.

Its facilities are fantastic, considering this costs around £100. 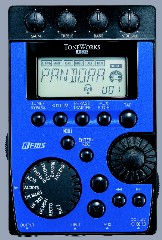 The guitar does feel nice though, with the V-shaped neck profile, It has active pickups, and the Mid Boost is mammoth.